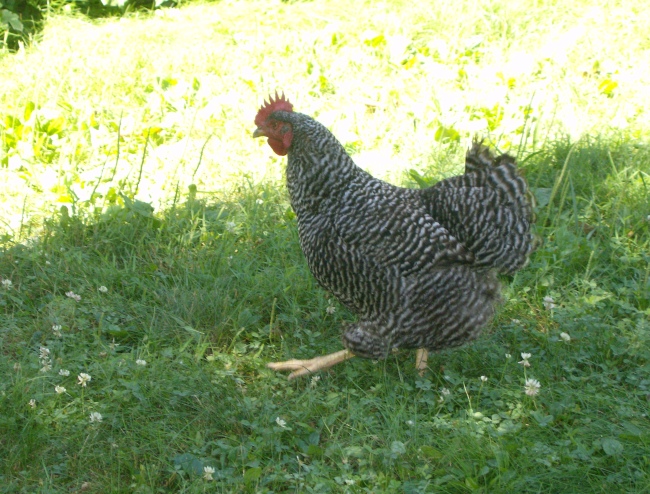 This is the story of a chicken.

Last winter, I drove out to a goat farm in the middle of nowhere, with a friend and one of my boys in tow, to pick up two barred rock hens and a little bantam rooster that the goat farmer was giving away because they insisted on nesting in the shed with the new kids.  One long, wintry, smelly drive later, Charlotte, Emily and Pontoon the rooster arrived at their new home.

It took a while for everyone to adjust.  Pontoon was scared of our hens, and Charlotte and Emily felt the need to show everyone else who was really in charge now.  But things eventually settled down, as things do, and our little flock integrated fairly smoothly.

Then we noticed that Emily was sneezing.  Not just occasionally, but about every fifteen seconds.  We watched her for a while, but she seemed to have no other symptoms.  I read up extensively on chicken ailments, and learned way more than I ever wanted to know.  I talked with a vet, who assured us that Emily was probably fine.  I isolated her for a while, feeding her a special diet to see if her sneezing would clear up.  It didn’t, and aside from sneezing, she seemed fine for about a year.  But about a week ago, she stopped roosting with the other chickens at night.  Then, a couple of days later, my Sainted Husband noticed that Emily wasn’t leaving the chicken house.  He took her her own water dish since she wasn’t venturing into the yard.  This afternoon, when I went to collect the eggs, Emily was dead, curled on the floor of the chicken house with her sister Charlotte watching over her.

When you live with creatures, you live also with death.  It still disconcerts me, and I think it always will, because it’s a reminder of the fragility of all life.  But I held it together this time, and got the shovel, and carried Emily up through the Christmas trees to the hill behind my house.  In the near-freezing late afternoon, I dug a hole in the stubborn Shenandoah soil, prying loose rocks and muscling down through layers of red clay.  It was only partly sentimental; if she was diseased, we don’t need the other chickens pecking at her, or any other animals.  It was also a country-girl love-offering to my husband, not to greet him at the door after a long day of teaching with, “Hey, hon, a chicken just bit it, so can you go take care of that?”

I set her carefully in her little grave.  There is something about the act of burying, even if it’s only a chicken, that seems to demand words and actions–something to mark the enormity of the moment when a life from this world crosses that unseen boundary to whatever lies beyond.  All I could think of were the last three words of “The Wasteland,” and so I whispered them over her.  Shantih, shantih, shantih.  I scattered three handfuls of soil over her black and white feathered body, and filled in her grave.

I am a biologist’s daughter.  I know that a chicken is just a chicken.  I know, too, that the life that was in her will be dispersed and magnified into countless other tiny lives.  I know that her flesh and feather and bone will feed microorganisms and grass, that her tiny spot of red Virginia clay will be just a little richer.  But I am also a storyteller’s daughter.  I know that a chicken is never just a chicken, but an intersection of many things.  And I wonder where the spark that animated her has flown.  Does it go somewhere?  Where do words go once we’ve spoken them?  Where does light go when it’s extinguished?

Because I am a writer, I walked home, sober under the grey sky, put away my shovel, washed my hands, and looked up “Emily Bronte’s death.”  I knew she died too young, because that’s what you do if you’re a nineteenth-century British woman novelist.  What I didn’t know, but suspected, was that her sister Charlotte was at her side.

Charlotte the chicken, unlike Charlotte Bronte, did not attempt to send for a doctor, and certainly has not produced any literary works of merit.  But even after Emily had disappeared into the earth, Charlotte stood watch in the chicken house over the spot where her sister died.

I know that Charlotte is just a chicken.  I’ve lived with chickens long enough to know that they are not geniuses, and they are definitely not philanthropists.  So I don’t know why she kept standing there, marking that spot, making it something more than a patch of pine shavings on a chicken house floor.  I don’t know if chickens are capable of love or grief, though humans are certainly capable of reading too much into things, of anthropomorphizing everything around us.  But I do know that if I have ever seen a chicken look bereft, Charlotte did.

Maybe it was only because I wanted her to, because I want desperately for no death to go unmourned, no life to go unmarked.  Because it all matters–every last little tiny speck of life.  If it doesn’t–if some lives can somehow be judged more important, worthier, more valuable–then what is the point of any of us?

I am telling you the story of a chicken because I need her life, and her death, to matter.  I am telling her story because, although she was just a chicken, she was a creature who shared my world.  She was part of an increasingly bizarre and beloved menagerie that now numbers four humans, one dog, one cat, one part-time chinchilla, ten assorted chickens, four honeybee colonies that may or may not have survived the last few weeks of killing cold, and one geriatric sea monkey.  (Yes, we have one sea monkey left.  Just the one.  The one that does Darwin proud.)  I am telling her story because stories, even the smallest and the humblest, matter.  They transform the world.  They are life and hope and redemption.

That is why I write–because words are my saving grace, because they can remake what has been unmade, can wrestle victory from the jaws of defeat, can resurrect the dead.  Because in the world of my words, Emily is more than the sum of her sneezing, failing parts, just as she was on this planet, in her own small, wheezing way.  She was a life intersecting with my own and others’.  She mattered to me, and she mattered to Charlotte, and her death leaves a hole in our flock and even a small pinprick hole in this world.

Stars, too, look like pinpricks from light years away.

One thought on “A Prose for Emily”