Sunrise comes late, bleeding color across the sky. I let out the chickens, and they burst out across the lawn in an explosion of feathered indignation. While I pin wet laundry to the clothesline, the chickens scuffle through drifts of oak leaves behind me, sounding like approaching footsteps. It is tempting to forget that their ancestors were dinosaurs, that their muffled fussing and kicking is hunting, that they are predators.

My fingers numb quickly in the chill morning air–first just cold, then throbbing with pain. Like shards of the Snow Queen’s looking-glass, the cold works its way inward, settling over the skin, dissolving like snowmelt and percolating down to the core. I think of the countless women before me who have hung their laundry out in the blazing cold, the dry air of autumn. A mug of tea is steeping in the kitchen, waiting for me in a snug house. I think of women draped in fur, wrapped in homespun linen, who returned to drafty huts and smoking fires, and the cold touches deeper. 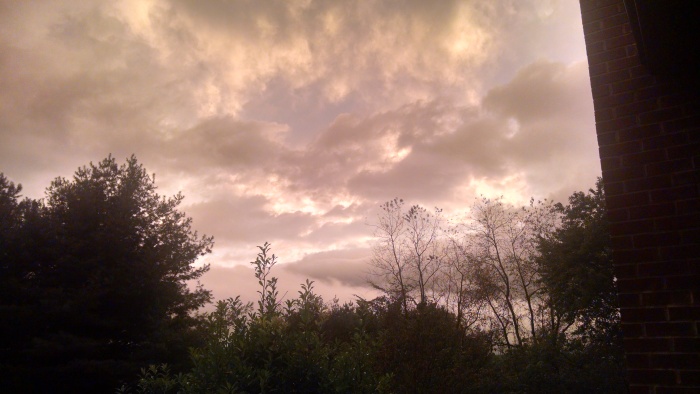 Autumn is my favorite season, maybe in a perverse kind of way–there’s the riotous shout of fall leaves, a mad explosion of color, but also the constant reminder of winter, mortality, failing and falling. Yesterday I ate lunch outside, by myself, under an impossibly blue sky, a sky so saturated with color that if it had been any bluer, blue must have rained down in heavy drops, splashing across grass and pavement. After a while, one student ventured outside, too, and sat down on the far end of the patio. A bee that had been exploring the possibilities of my lunch redirected its attentions to her, persistent despite the snap in the air, a reminder that summer hangs on with tenacity here in the South. The student yelled and flailed a bit, then gave up and retreated inside. Southern summers are not to be trifled with, even in their death-throes.

This morning, though, the sky’s blue is thinner, colder. A week ago, the heat was nearly stifling; now, suddenly, autumn is HERE. Four-way hummingbird battles at the feeder are finished, the glimmering dart of green iridescence faded like chlorophyll from chloroplasts. The heavily pregnant praying mantis Thing 2 delightedly located on the front deck has laid her eggs in some secret place. The doe raising her three no-longer-spotted children in the woods behind the house has discovered the carpet of pears fallen from the tree in the orchard. Pine needles settle in copper drifts over the driveway, perfuming the air with the pure-resin scent of change.

In the woods, mushrooms burgeon after a summer of downpours. Rosehips redden on wild bushes, and undergrowth fades back to reveal the bleached skull of a deer, tumbled among long white bones in a gully. Thing 2 brought me a red-blotched leaf yesterday, and I found it this morning in a pocket as I hung clothes on the line–crinkled and faded from its journey through the bowels of the washing machine. He also recounted with great enthusiasm a sighting of a mother mouse in his grandparents’ garden, her three babies hanging on for dear life as she scuttled up a fence post. 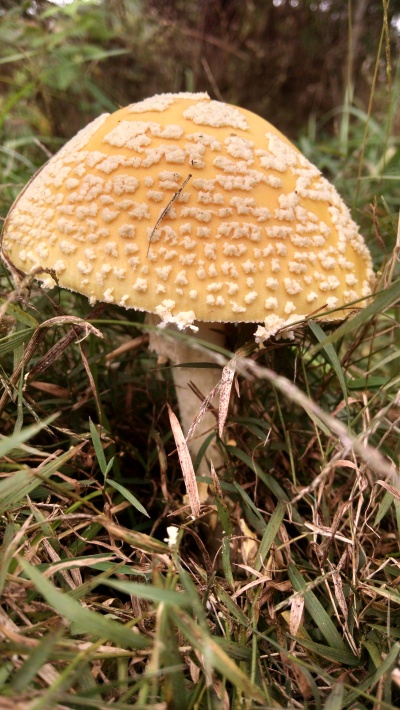 It is time to clear gardens, to put the earth to sleep for the winter. It is time for faerie tales, fires, and woodsmoke, for cups of tea and chai and spiced coffee and hot chocolate. It is time to slowly chase every sweet golden sunspot around the room. We perch between seasons, between worlds, and it is time for magic.