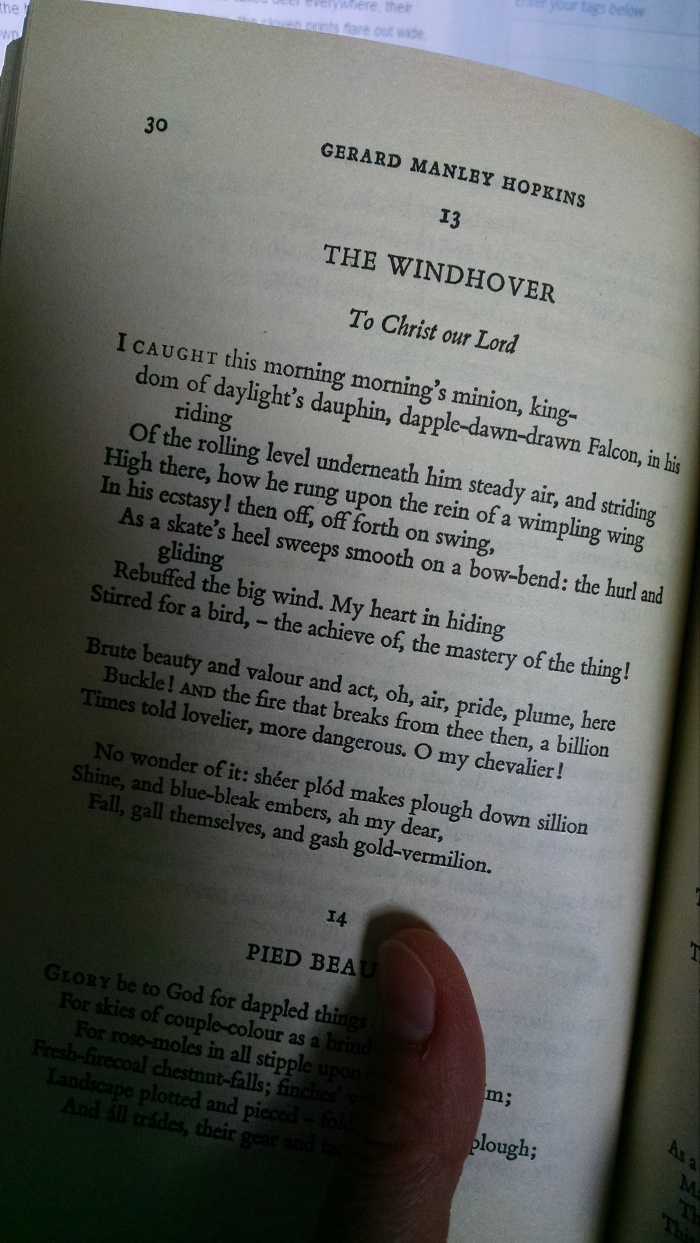 I trudge through the white field, red boots breaking the snow-crust beneath me. My dog skitters along beside me, her forty pounds sometimes borne up by the thick glazed layer of frozen snowmelt. In places, even my hundred and fifty pounds don’t punch through to the earth and for those few moments, I am held up between earth and sky. The wind whips harder, blowing the leash in a taut curve between collar and hand, and I think of a ship’s rigging, ropes lashing and sails billowing.

We walk this path nearly every day. If we go in the morning, we may catch a glimpse of morning’s minion, the red-tailed hawk who haunts the woods. Each time he leaps into flight overhead, lines of Gerard Manley Hopkins’s poetry fill my mouth like water. If we go early enough, ours may be the first tracks down the twisting trails through woodland and field. If we go later in the day, the prints we’ve scribed in the snow become part of a conversation, a story I try to read, in my fumbling and half-literate way. A rabbit paused here and then took off, startled, perhaps, by the fox whose tracks run hard by the fenceline. Something larger, too–a coyote–and the limber-toed prints of a raccoon. White-tailed deer everywhere, their heart-shaped hooves stamping all the way through to the bone-chill earth. Here and there, the cloven prints flare out wide, splayed against the dirt, where the front legs came down hard off a leap. The deer, like me, are for a second no longer earthbound.

This is the beauty of roots, this walking of the same trail each day. Each day there is something new on this trail–not new to itself, of course, but new to me. I have sunk my roots deep in this frozen Virginia soil, and this has its rewards. But when a hawk or buzzard or blackbird vaults upward, transforms the ungainly flailing of wings into the poetry of flight, I too long to fly.

A friend once observed to my mom that most parents are good at giving their children either roots or wings. The friend felt she’d done better in the wings department, my mom told me. Mom paused then, and added, “We gave you good roots.”

I think I err on the other side, wanting my own nestlings to spread their wings and soar toward sunlight and freedom. It’s a tricky thing, this roots and wings business. I’m resisting the compulsion to say something about balance, because I’m tired of balances. I believe in balance, of course, in a physical sense; fourteen years of classical ballet will instill that pretty deep. But this notion that less concrete sorts of balances are desirable or even possible is one that’s begun to irk me. Work/life balance, for example. Why should I be balancing one against the other? Is work not part of life? Trying to balance things makes me feel neurotic, nudging the weight a hair’s breadth at a time across the scale until some kind of mystical hovering stillness is reached. What’s the point? Is a perfect middle even possible?

So I’m not trying to come up with some kind of balance between roots and wings. Like the tracks I find in the snow, roots and wings are interesting to me because of the conversations they have, the possibilities for exploration that they open. There’s not really balance in a conversation so much as flux, a constant tidal motion the end goal of which is not some kind of quantitative equality, but movement.

And I suppose that movement is what I’m really hoping to achieve with this project. I’m a Luddite by disposition–each interaction with technology is a leap of faith for me. I’ve observed various 365 photo projects with a sort of detached fascination and horror, wondering how anyone could stand putting themselves out there 365 days in one year. I have this sort of perverse stubbornness, though, that leads me to want to try precisely the things I’m inclined to knock. Maybe I’m just afraid of missing out. I think my greatest fear was that a 365 project would be unforgivable narcissism, and anyway, who wants to be reminded of me and my quirkster worldview every single day? I mean, some days I’m sick of me. But Marisa Goudy changed my mind with her post on “how a 365 photo project makes you a better writer.” I didn’t want to spam the interwebs with selfies–trust me, the interwebs are not ready for such an onslaught, especially from a girl whose cardinal grooming sin is forgetting to brush her hair. I’m also not a fantabulous photographer; I rely on my friend Cara Walton to take gorgeous pictures of things. And after you’ve seen Cara do a couple of 365 photo projects, you kind of wonder what is the point in ever taking another picture again. I mean, she could make pocket lint look artistic.

I started on February 1st. Imbolc. Saint Brigid’s Day. That seemed like a good New Year, since I missed the January 1st one. Being late to the party is becoming a part of my signature style, I’m afraid. Anyhow, I’ve been posting a photo a day to Facebook and Twitter for almost a month now. I didn’t decide until a few days in what my theme would be, and then I remembered that recalled conversation between my mother and her friend, and decided. Roots and wings. I can spend a year in the company of roots and wings. And hopefully, I can deepen my own roots and strengthen my own wings in the process.

I can’t say this early on that it’s made me a better writer in any quantifiable way. It feels much, much too early for that. But the challenge–for a non-photographer–of taking a picture each day, and sharing it, is starting to make me a little more observant. It’s also a good reminder of the wonder in my world. Some days, it’s hard to decide between pictures, and that’s a sign that it’s been a good day.

The #LiveTheQuest prompt for this week, from Jeffrey Davis, asks us to envision a competitive collaboration. Here’s the prompt:

#LiveTheQuest – 8:
How can you competitively collaborate or collaborate?
In our Be a Business Artist Manifesto film, I noted that “we seek competitive collaboration versus cut-throat competition.”

Competitive collaboration is when you work with someone who is in your field, whose business or venture might draw the same audience as yours. Yet you recognize that the two of you synergistically could create something far greater than any one of you. Who is one person you could reach out to for collaboration – even if it’s competitive collaboration? What will you ask of that person? How can you frame your ask in a way that the person recognizes what is of value to her or him? How can you frame the ask in a way that will resonate with a meaningful ideal that transcends both of your self-interest?

At the risk of sounding like a cop-out, I’m not ready to reach out for this kind of competitive collaboration. For one thing, I feel like I’m still germinating–like I need to grow myself as an artist a little more before I have this kind of offer to extend. Right now, I just have so much to learn. I’ve been enjoying collaborating with Cara on photography/writing projects, but as far as people in my specific field, I think I’m doing about what I can be at the moment. I exchange critiques with other unpublished writers, I share ideas, I look for opportunities to engage with my local writing community. So maybe, at the additional risk of sounding hokey, what I need to do right now is collaborate with myself–engage more aspects of my creativity. I think that for me, that’s what this 365 project ultimately is–a step outside being the writer I think I am toward the writer I want to become.