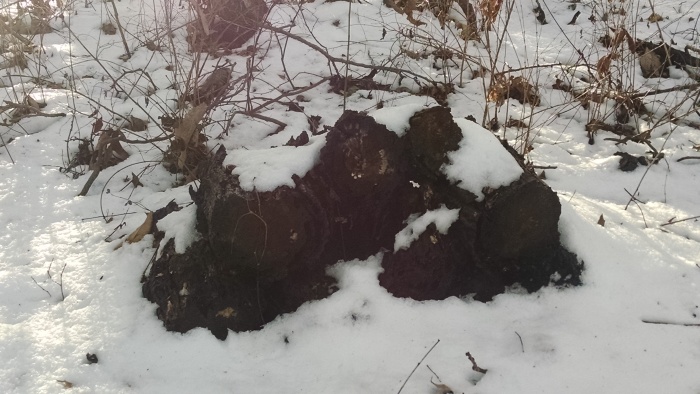 Almost every day, the dogs and I walk in the woods. Once a month or so, I snap a picture of this tiny woodpile. Every day, it is microscopically diminished, but over the course of months, its leaching-back into the soil becomes visible. The once-yellow wood has blackened, rich and dark against the snow. This is no domestic woodpile, well-fed and sheltered from the elements. This is a feral creature, a denizen of bracken and abandoned barbed wire fencerows folding in on themselves. It would take wizardry beyond sulfur-tipped wands and strike-on covers to coax these logs to flame.

It’s been a few days since I visited the woods. February seems determined to prove itself just as capable of mayhem as the big-kid months, and so has managed to pack into its first half two very sick little boys, multiple family members undergoing surgery of both the planned and very unplanned varieties, and a cold that is trying for some kind of award. Every shot I’ve had at writing time this month has been foiled by illness or exhaustion.

As a wise woman once said to my mom, “You can handle the big things. It’s the little things that get you.” I’ve been handling the sick and the gross and the trying to sleep in a tangle of tiny thrashing limbs, but the stupid firewood is about to do me in.

It’s wet. I think at some point it was probably well-cured, but we’ve had damp weather–snow, rain, days without sunshine–and now the wood is wet. This morning–after administering antibiotics and nasal rinses and more or less gentle reminders that we don’t do fratricide in this house–I spent about two hours getting fires going in the woodstoves. Two hours. It was a pyromaniac’s nightmare.

Some days, the spark just doesn’t catch. The tinder is soggy and cold, and sheer stubbornness is all that gets me through. The spark of story rekindled for me a week or so ago, just before the latest outbreak of the plague, and I’ve been antsy to return to a novel I set aside months ago. I need to write, but the tinder of life is drenched with everything but writing time.

This isn’t a pity-party. (Well, not yet. I haven’t decorated yet. Or made a cake or anything. But I might. If I do, you’re invited.) This is just to say that I suspect I am not the only one out here in the wilds of a chill, damp February. I haven’t seen anybody else (mainly because I’ve had my head in the damn woodstove and not in a tragic poetic way), but I know you’re out there.

Back in November 2015, a million million eons ago, I charted a course for my new year. Part of that charting was assigning a word to each month, to give it a little shape and focus. My February word is “buoy,” because this is the time of year I need that most. My plan was to do all sorts of lovely things to buoy other people up. As it turns out, mostly I am just clinging to Queequeg’s empty nailed-together coffin and gritting my teeth as I try not to become sharkbait. I haven’t been present in the ways I intended. I feel like less of a buoy and more of a dead weight.

I don’t have much to offer at the moment, so I’m offering this: if you, too, are at that time of year when you wonder why the hell Ishmael thought November was the dreariest month, or T. S. Eliot said April was the cruelest, because damn, February is ugly–if you too are trying to strike sparks against sodden firewood–you’re not alone. We’re in this together. If you need a place to let it out, your words and woes are welcome here. I’m here with you. Look for the poorly-smoking chimney and the writer-mama with her head in the woodstove, breathing fragmented poetry to the struggling coals.