Above are some images of the final entries in my manuscript project. For the last few, I moved from calligraphy pens to a fountain pen, from medieval scripts to eighteenth- and nineteenth-century ones in an attempt to show a shift over time. The entries in the manuscript span about four hundred years, so I wanted to give a visual sense of that progression, in addition to keeping each character’s words distinct from those before and after.

The final entries in my manuscript project are written, and I’ve moved on to the next stage of the process~marginalia.

Marginalia are the marks readers add to texts, and may take the form of everything from scholarly notes to doodles in the margins. They’re a common feature of medieval manuscripts, and so I planned from the beginning of this project to add them in once the original text was complete. There’s something warm and inviting about marginalia; they make a book look lived-in, loved, challenged, fluid. Alive. Marginalia open up a conversation between reader and text, and add to the multilayered magic of a book. (One of the most prized books in my library is a weathered English poetry anthology crammed with marginal notes in my grandfather’s hand.)

Glosses are marginal notes in medieval manuscripts, and they are rich with meaning. As Dr. Sinead O’Sullivan explains in a blog post, “glosses encoded and obscured as well as explained.” This is part of their magic. I’m having fun with it in this project, imagining later writers in the book leafing back through the words of their predecessors and leaving comments, sometimes to explain, sometimes to chastise, sometimes to deliberately reinterpret. Depending on their personalities, their agendas, they react in scholarly fascination, reverence, indignation. 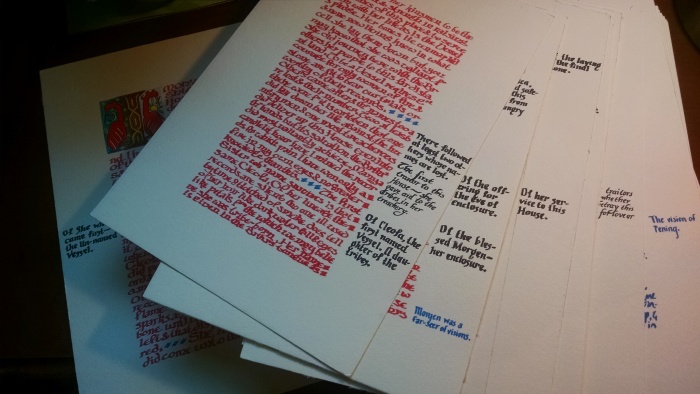 Once the glosses are finished, my plan is to go back through and add more artistic marginalia–some small illuminations curling around the words, lounging in the margins. Maybe some knights fighting snails. Almost definitely dragons.

And then, it will be time to learn how to bind a book.